Customize further your Serious Games with the arrival of VTS Editor’s 4.0 version!

Serious Factory announced on June 6th, at its Immersive Learning Time event, the arrival of the new version of the authoring software VTS Editor. This new version entitled 4.0 represents a new step in the development of Virtual Training Suite and brings its share of features that will appeal to designers who are adept at interactive and above all customized Serious Games. On the deployment side, the VTS Player interface has also been redesigned to simplify the use of the platform. 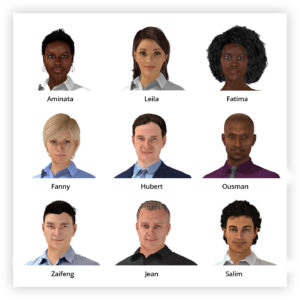 In order to bring an extra touch of pedagogy to your Serious Games, the 4.0 update integrates more realistic new animations to the characters. The improvement brought to the animations is done at the level of neutral and positive postures. The challenge of having more realistic animations is to encourage learners to learn their knowledge. Indeed, the improvement of the emotional animations and body animations already available allows the learner to work on his soft skills to be more efficient in his daily professional life.

… The arrival of the “Animation” block

The 4.0 also brings a new block, the “Animation” block. It allows you to play animations specific to the characters in the scene. You will therefore be able to customize the gestures of the characters in your simulations thanks to about twenty specific animations: acknowledge, deny, ask to come, military salute, etc. These specific gestures are available for characters from the latest generation and their availability varies according to the gender and position of the character. Of course, each Animation block can be configured (choice of character, start or end time of the animation) and will allow you to preview the selected animations.

Create your own environments with the Scenery Configurator

Personalize your Serious Games even more with the arrival of the Scenery Configurator (Available from the Gold pack). It allows you to create custom sceneries (2D, 360° or VR) where you can add characters and media slots wherever you want. You can also configure the lighting of the scene. Creating a Serious Game that reflects your company’s image has never been easier. In addition, from the Silver pack, you will be able to use our 4 new sceneries with editable background images. These sceneries represent: a group discussion, a face-to-face discussion and a shot/reverse shot (in 2 different views).

Have an even easier deployment of your scenarios with VTS Player

VTS Player has also been redesigned. Discover the new interface of Experiences’ choice for a seamless and more instinctive navigation of the software. This new design has been designed with our users to ensure that it corresponds perfectly to the learner’ uses.

If you have subscribed to the Platinum pack, you now have the possibility to export your experiences to Android and iOS to use it with a VR cardboard.

You would like to create your own Serious Games customized to your company’s image? Download the latest free trial version of VTS Editor.

Serious Games in 2021: The uses you might think of

Statistical feedback: how VTS Perform facilitates the measuring of the effectiveness of skill acquisition